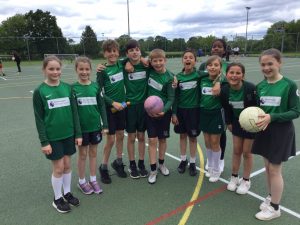 Grimley & Holt’s year 5/6 netball team rose to the challenge to come out on top at the Worcester West Partnership Netball Tournament.

Hosted by The Chantry in May, the competition featured six matches in a ‘Round Robin’ competition. Grimley were on fire, winning every game they played and only conceding one goal.

Grimley played with determination from the first centre pass, with captain Amayah playing a crucial role controlling the centre, tirelessly defending and attacking throughout the tournament.

Rotating around other positions in the team were Amelie, Elisia, Phoebe, Kirsten, Isabella and Lily. Their blocking, passing and movement around the court was first class, feeding the ball effectively through the middle third and onto the goal scorers.

The rules allowed two boys in each match with Max, Max and Jack rotating each game. Again they played key roles in defence and attack, netting a number of goals between them.

What a brilliant result for the team, they thoroughly deserved their success. We’re very proud of you!

This website uses cookies to improve your experience while you navigate through the website. Out of these, the cookies that are categorized as necessary are stored on your browser as they are essential for the working of basic functionalities of the website. We also use third-party cookies that help us analyze and understand how you use this website. These cookies will be stored in your browser only with your consent. You also have the option to opt-out of these cookies. But opting out of some of these cookies may affect your browsing experience.
Necessary Always Enabled
Necessary cookies are absolutely essential for the website to function properly. This category only includes cookies that ensures basic functionalities and security features of the website. These cookies do not store any personal information.
Non-necessary
Any cookies that may not be particularly necessary for the website to function and is used specifically to collect user personal data via analytics, ads, other embedded contents are termed as non-necessary cookies. It is mandatory to procure user consent prior to running these cookies on your website.
SAVE & ACCEPT
Skip to content